It’s time to enjoy the holidays with a trip down memory lane! The current Beyond comic The Coed Curse – Sorority Sisters is coming to an end after 45 pages. That means the next Beyond comic will be starting on December 16! Introducing Becoming A Bridesmaid – The Best Man!

“An alternate ending to Becoming A Bridesmaid where Amanda falls for the charming Brad rather than the lovely Lucy.” 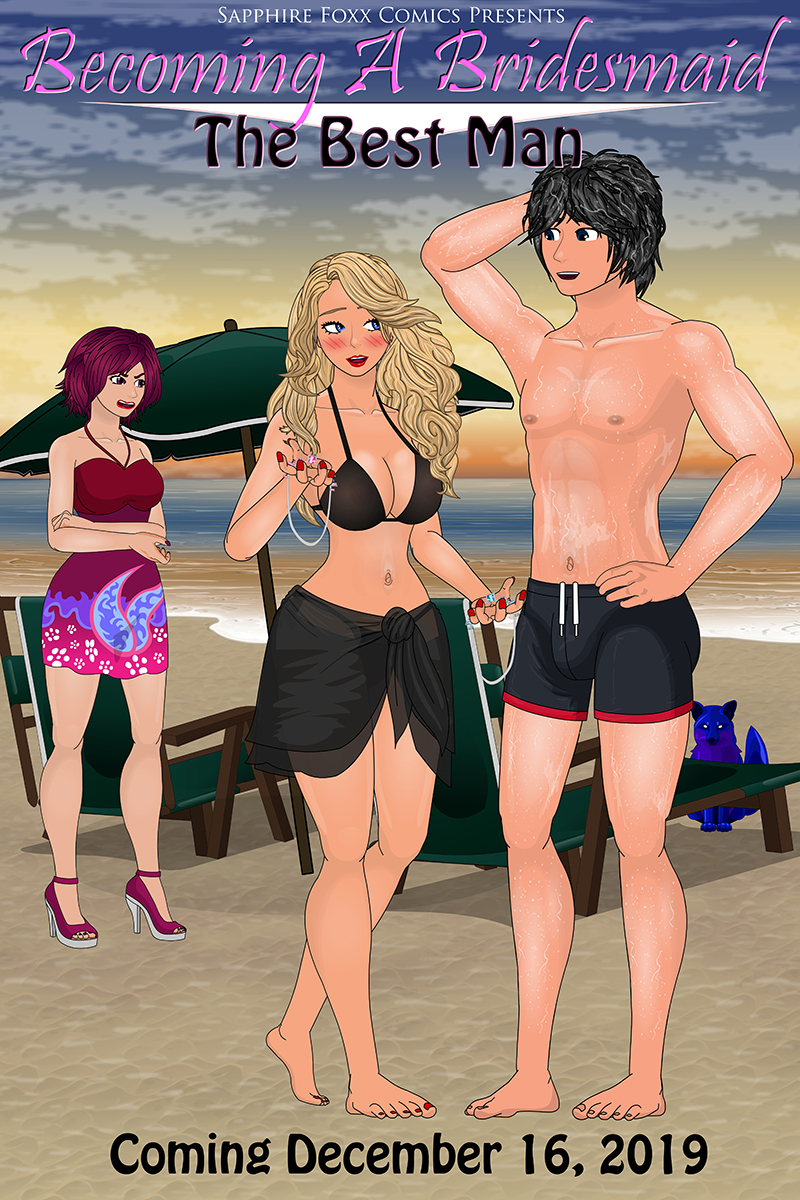 So far we’ve brought back HD character models for Scott, Jamie, Robin, and Riley in their Beyond Comics. Now Amanda and the Bridesmaid crew will be revitalized with new graphics!

That said… has any characters from Becoming a Bridesmaid shown up in other installments of the SapphireFoxx-Verse? Just curious, because I don’t recall if such a thing has occurred.

Just made my day. I had always hoped for Amanda to fall for Brad so I can’t wait.

ooo… Alternate endings are always cool. This should be an excellent story. Any idea about how long it will be?

Really looking forward to this comic. Any chance for an anniversary Becoming a Bridesmaid can get a HD overall and get voiceovers as well like Stealing from Sis?

The reason that “Stealing From Sis” got an updated HD version is because those first seven episodes or so were around 10 minutes of footage all-together. Which means that doing updated versions of every episode of SfS that didn’t have voice acting, all in one video, would be less than 20 minutes long. The same cannot be said for “Becoming a Bridesmaid” since remaking every episode so that it has voice acting would be just as long as the original series – roughly 90 minutes long. You’d basically be asking Sam to make a movie, and not even an original movie, just a remake of the same series that’s already out there.

I want to say that “The Best Man” is the closest we’re ever going to get to an HD remake of “Becoming a Bridesmaid.”

It just would be nice to get voice actors put in.

It would be nice, but realistically it most likely will never happen. Sam has said that he would basically have to remake the series just to get voice acting in there and how that’s too time and effort on a product that already exists, when that same time and effort can be better spent on making entirely new animations.

can’t say im really fussed about this one as I really like Amanada and Lucy and girl on girl romancers are petty rare on this sight, I think only of becoming a bidesmaid and The Coed Curse – Sorority Sisters are they only ones I can think of… oh wait fractured though I think on of the tro of girls that stayed girls at the end never lost her dick. not sure

Lillie had a vagina at the end of “Fractured.” Also, we’ve had plenty of lesbian sex scenes throughout this website. Christina and Holly in “Different Perspectives,” Nikki and Leena in “Maker’s Game,” Robin and Riley in “Girls Night Out” and Ashley and Holly in “Ashes to Ashes.” And I’m sure there’s more I’m missing. Lesbian romances are not uncommon on this website.

oh yeah I suppose your right I must have forgot, my bad