Are you ready for March Madness! No, I don’t mean boring old basketball! This March you’ll be able to participate in the Sapphire Foxx Waifu Tournament!

36 Sapphire Foxx characters will face off in a tournament of daily match-ups from February 25 to March 31. Fans will be able to vote in the daily match for which waifu they want to advance to the next round. The loser of each poll will be eliminated from the tournament. You get to decide who will be crowned as the ultimate Sapphire Foxx Waifu! 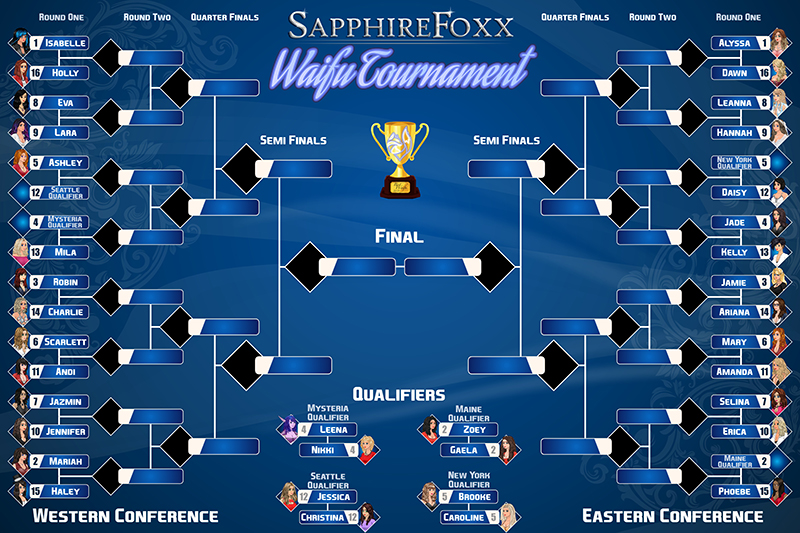 Similar characters from the same series will face off in qualifying matches to see which will waifu will earn a place in the tournament. This is to reduce redundancies and to give more representation to our various animations and comics. Each qualifier has a predetermined seed. The Qualifiers will run from February 25 to February 28 in this order:

Both the regular and Beyond sites will have their own polling. Because the polling will be separate, it’s very likely we’re going to see two different brackets unfold on each site, with potentially a different champion on each site.

The Champion will be earning a grand prize, with semi-finalists each earning additional prizes. These prizes will be kept secret until after the tournament, so that they won’t influence voting. The Champion and final four on the Beyond site will have their own rewards as well.

That’s all! I hope you’re all looking forward to this Waifu Madness as much as I am. Tune in on February 25th when the tournament begins!

*snicker* many of the complaints I see here are EXACTLY the same complaints when I am looking at reaction to the basketball bracket.

Silly question, but does anyone happen to have a list of which comic each girl comes from? I recognize about half of them. But the others, I’m drawing a blank. Mwuah! 🙂

I’ll include links to their series on the days of their match-ups.

BTW, I am guessing “Kelly” is from “ An Untrusting Fiance”?

The dispute will finally be decided.

And yes, her name isn’t first used until the next episode. 😉

Are we gonna get a secondary match table for the lesser popular girls?

I love the concept but my only issue with it is that 15 and 16 seed type of girls should have been in the qualifier rounds and not the higher seeds type of girls. IMO, most of the girls going up against each other qualifier rounds have the potential to each make to the quarterfinals on their own if they were already seeded separately in the tournament.

Like Sam said, it would be pretty redundant to have many girls from the same series scattered throughout the tournament. Sam wants there to be as many different representatives from as many different series as possible. Hence the qualifiers to narrow that field down to the best of the best. It wouldn’t make sense to have characters like Caroline, Leena and Zoey being 15 or 16-seeds.

It would be a waste of time to hold qualifiers for 15 and 16 seeds when they’re just going to get smoked (most likely) in the first round. These qualifiers actually mater while removing redundant characters.

Wanda is clearly the winner here!! So why get the other girls’ hopes up? lol jk jk this will be super fun though! 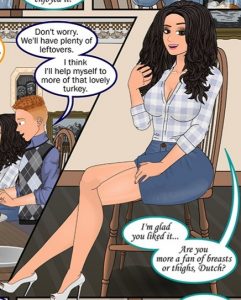 Honestly, Wanda definitely is hot. It’s just a shame that Cinder Isle is already represented by either Gaela or Zoey.

Still, I kinda wanna see Wanda in a parody of WandaVision (Not just because of the name, but also because I’ve only recently managed to start watching it after binging the entirety of the MCU for the past several months), but with SF characters.

Shit! Leanna and Phoebe are in the same brackets!!!

Honestly, I don’t foresee Leanna or Phoebe making it passed the first round. I think Hannah will barely beat out Leanna (even if Leanna does win, she’ll get destroyed by Alyssa in the next round), and there’s no way that Phoebe is going to beat Gaela or Zoey.

I don’t know how people can fill out their own brackets, but go ahead! 🙂

Hoping for the best. 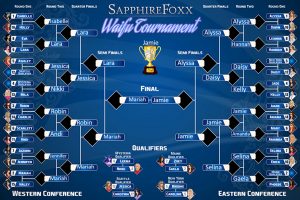